Now maybe it’s just me, but I only watched the Golden Globes to see Taraji and a few others.
I wish someone told me there were no performances during the entire THREE hour show, but that’s neither here nor there. Here are my top five highlights from the Golden Globes.
1. And the winner is….
Jamie Foxx pulls a Steve Harvey for the Biggest Original Score. I don’t know much about the category, but when Jamie Foxx stated the winner was Straight Outta Compton I was weak mainly because the movie wasn’t nominated. Speaking of nominations, the movie was not nominated for a single Golden Globe (why should I be surprised?) Moving on.. *hey O’Shea Jackson Jr.*

2. Denzel, do you need your glasses?
Denzel Washington became the 3rd African American recipient of the Cecil B. DeMille Award. It was amazing to see him bring his wife and children on stage, but after his entire career, I expected him to not fumble through his acceptance speech, but we’ll just blame it on his vision. SN: Black don’t crack because he could GTD. lol

3. Gaga over the Queen? Where they do that at?
So I had no idea Lady Gaga was acting, but to be honest I’m not a fan of her music so I don’t follow her. She’s just too weird for me #sueme. She beat out Queen Latifah (Bessie) for Best Actress in a Mini Series. I’ve seen neither American Horror Story or Bessie, but I find it hard to believe Gaga can out act the Queen. Apparently Leonardo DiCapro thought so also.

4. Don’t bite the hand that feeds you Stallone!
Sylvester Stallone won the award for best supporting actor for his role in Creed. Yet he forgets to publicly thank the two people who rebirthed the dead film series: Creed’s director, Ryan Coogler, and the lead actor, Michael Bae Jordan. Once he remembered he went back to the podium according to sources. Ava and Samuel weren’t here for it. 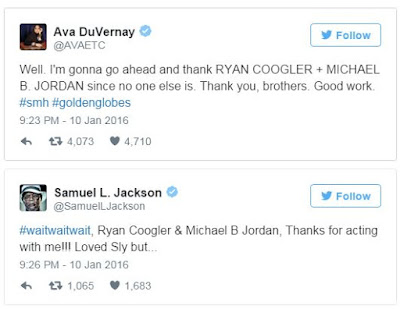 5. I waited 20 years for this!
I love me some Cookie Lyon!! Taraji P. Henson won the award for Best Actress in a TV Drama. She’s only the 3rd African American woman to win the award as well. Beating out Viola Davis and others, Taraji played the role of Cookie last night letting everyone know she was deserving of the award and would get her shine. Handing out cookies to everyone, Henson was prompted to end her speech, but let the producers know she waited 20 years for that moment. I AM HERE FOR IT!!

After that… I went to bed